From Edison to Audible: A Brief History of the “Talking Book”

Audiobooks are currently a billion-dollar per year industry. It wasn’t always that way though. The modern audiobook industry developed initially as a means for the blind to further their education. Nearly a century and a half has passed since then. The days of thrill of the Nickelodeon or novelty of a verse or two from Shakespeare on the Victrola are gone. Audiobooks, however, seem here to stay. If you’ve ever been curious about exactly how the modern audiobook came to be, settle in for storytime as we offer you highlights from audiobook history.

EDISON AND THE AUDIOBOOK

In the 30s, Audiobooks in the modern sense were born. That wasn’t the beginning though. Edison played his first-ever “talking book”  on a phonograph  circa 1877.  In his patent application, Edison touted “phonographic books, which will speak to blind people without effort on their part.”

Alas, the tech just wasn’t there yet. The first ever recorded verse on a phonograph was “Mary Had a Little Lamb.” In 1878, Edison demonstrated his phonograph recording of the nursery rhyme “The Cat and the Fiddle” and a verse from Alfred, Lord Tennyson. This was just a teaser of things to come.

“Phonographic books” were a long way off from here. Only short spoken word recordings were possible from the late 1800s to early 1900s. Listening to a whole book on  round cylinders limited to 4 minutes?
A practical impossibility. Even when the length increased to 12 minutes they were more suited towards the recitation of short poems.

LIBRARY OF CONGRESS AND AFB AFTER WORLD WAR I

By the 1930s, records could feature up to 20 minutes, so by 1931 the American Foundation for the Blind (AFB) and the Library of Congress’ Books for the Adult Blind Project took steps towards the origins of the modern audiobook market by creating the “Talking Books Program.”

The Library War Service and the American Library Association were vital in funding the “Talking Books Program.” A program later renamed Books for the Blind. Initially, these were primarily designed for injured soldiers in World War I as well as for other adults with sight issues. In a letter to President Franklin D. Roosevelt, Helen Keller referred to “talking books” as the greatest boon to the blind since Braille.

Technology continued to improve. The medium itself advanced right alongside. 1934 saw recordings from the Bible, Declaration of Independence, sonnets and plays from Shakespeare, Rudyard Kipling, P.G. Wodehouse and others. In 1948, New York Public Library’s Women’s Auxiliary member Anne T. McDonald founded Recording for the Blind & Dyslexic, later rebranded as Learning Ally. Once again, the influx of injured veterans after the second Great War was a major inspiration. The GI Bill had just been passed as well, making education for veterans a priority. Veterans, not raised to read Braille, needed a solution.

By 1948,  “Long Play” (LP) records became a reality. The LP revolutionized the audiobook world once again. Caedmon, one of the oldest major audiobook publishers was born in 1952. It all began with a letter from Marianne Roney and Barbara Cohen offering Welsh poet, Dylan Thomas, $500 and royalty rights if he would record some of his work for them.

At the time, Thomas returned with just enough material for one side of an album. When pressed to find some more material that would be suitable for performance, literary and audiobook history was accidentally made. At the time, A Child’s Christmas in Wales was an obscure bit published several years prior in Harper’s. The Caedmon recordings cemented that nearly forgotten work as a Christmas classic. The popularity of the LP led to the story being finally published in book form. The world of audiobooks had been indelibly marked as a new medium for artistic expression.

Caedmon were also the first audiobook producers who were creating material for the public as a whole. Poems by Dylan Thomas read by the author and Thomas’s Child’s Christmas in Wales, of course, became a piece of audiobook history. Caedmon also released work by W.B. Yeats, Marianne Moore, T.S. Eliot, Gertrude Stein, Eudora Welty, William Faulkner and other literary legends. In many cases the works were read by the authors themselves. In other cases Caedmon had the likes of Richard Burton, John Gielgud or Vanessa Redgrave narrate. 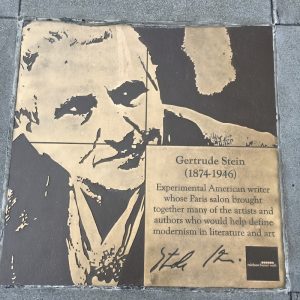 Back in the 1940’s Listening Library began distributing audiobooks to libraries and schools with children in mind. Founder Anthony Dillow was partially blind himself. He and his wife used their home in Red Bank, New Jersey as a base for their operations. 1956, the year after, Arthur Luce Klein and his wife began to produce poetry and drama recordings as well. Their recordings were for use in schools and libraries under the trade name Spoken Arts.

The introduction of cassette tapes in the 1970s was as revolutionary as the LP for the audiobook world. The genesis of unabridged book production finally commences. The cost of an unabridged book containing multiple cassettes ran into the hundreds, however. As a result it was prohibitively expensive for most people, but libraries began to carry them as a service for the blind and dyslexic. The latest advances in technology led to a virtual explosion in the world of “talking books.” By the mid-1980s, Books on Tape, Voice Over Books, Recorded Books, Chivers Audio Books, Metacom, Newman Communications and Brilliance joined pioneers like Caedmon to sell audiobooks at major bookstores like Walden Books, to libraries and through mail-order subscription.

1986, another flagship year, saw the creation of the Audio Publisher’s Association, Time-Life and Book of the Month club offering members the opportunity to receive audiobooks. Publisher’s Weekly began covering the audiobook industry in 1987 and by the end of that year, the market was estimated to be $200 million annually… and growing.

By the 1990s audiobooks were selling to the tune of over a billion dollars per year. Christopher Platt of the New York Public Library noted how the introduction of CD players in cars was a quantum leap forward. He recalled a patron checking out a suitcase of cassettes in order to take home unabridged audio of the Bible. The 90’s also saw the introduction of the Audie Awards, basically the Oscars of the audiobook world. Right at the turn of the millennium, Audible.com introduced a digital media player so in 1997 the market was forever changed again.

The first ever “Audible Player” was a far cry from the soft player millions use today. It was something between the size of an iPod and Walkman.

The early 2000s resulted in more evolution of the audiobook. There was the introduction of crowd-sourced public domain audiobooks under the banner of LibriVox. 2008 saw Audible being acquired by Amazon for $300 million. By 2014, Bob and Debray Deyan opened the Deyan Institute of Vocal Artistry and Technology, becoming the world’s first audiobook production school. As of 2018, around 500,000 audiobooks were in existence with sales growing each year.

In the last 140 years, audiobooks have only grown in popularity. As we enter a new decade it will be exciting to see how the medium evolves. Ian Small of Audiobooks.com certainly has high hopes for the coming years:

“I predict more competition and entries into the market, and more creativity as retailers try new things and battle for consumer attention. With that, we’ll see outside industries trying to align with positioned retailers to participate in the growing market, and different industries partnering together to create synergies and increase growth potential. I expect to see surprising collaborations, and new service models for the consumer, as well as experimentation with content and delivery.”

Audiobook popularity continues to grow by leaps and bounds. For most of the past decade growth was in the double digits each passing year, 37% in 2018 alone. With the popularity of podcasts crossing over, it is possible that we are seeing an auditory renaissance the likes of which hasn’t existed since television overtook Old Time Radio. International stars like Betty White, Jeremy Irons, Stephen Fry, Jane Fonda, Meryl Streep, Reese Witherspoon, Wil Wheaton are lending their voices to audiobook adaptations. Authors like Neil Gaiman, David Sedaris, Stephen King or even Maya Angelou have adapted their work to the medium as well.

There is much more on the horizon of course. Audiobook history is still being made daily. The interplay between the aforementioned podcasting world and the world of audiobooks,  and multimedia localization leading to penetration of foreign language markets are definitely a space to be watching. As for exactly what’s next, who can say. The one thing that is certain, the “talking book” has come a long way in the past 140 years.

Speaking of audiobooks, please let us know if anything in our catalog
looks interesting and we’d be glad to send over promo codes with no
strings attached! You can email me, Robert Wrenlock or drop a line to
engage [@] island.audio for promo codes, more info about our titles and
services or to suggest a topic for a future article or request a guest post
trade. Find us on Twitter to stay updated on future releases, new articles
and other fun stuff.