Our second interview in this profile series is with another multi-talented woman. Jesse Vilinsky is an award-winning voice artist who recently worked with author Bridget Tyler, whose interview was just posted last week.

Oh that’s a tough one. Honestly I love them all for various reasons. When I narrate, I get to inhabit an entire world and bring it to life. With ADR I get to help flush out and put the final touches on and collaborate with some amazing artists. And with voice/character acting for video games, animation and the like, I get to stretch my imagination outside of it’s norms and really create! As an artist, getting to do all that is such a privilege, there’s no choosing just one favorite.

What were some of the most challenging projects you’ve worked on?

The Division 2 was a challenge in what was required of me. Multiple voice session at full tilt can take a toll physically. People don’t always realize the physicality involved in voice acting, but it’s almost double what happens in on camera, I’ve found. You really put your entire body into it, and with that game, being a soldier mostly, there was a tension and strength that was paramount in each line. Such a rewarding project though. Really proud of it.

I would say that my accent training started when I was 5. I grew up as an only child of a single parent in NYC. I was incredibly observant of the way people acted and spoke. When I was 5 I started to pick up an Australian accent, and even tried to make people believe I was really from there! So I dabbled in this for most of my formative years. I would say it truly started in earnest when I was in college at the University of Southern California. There was where I really began to hone my craft as an actor, and then even further when I went to the British American Drama Academy. Being a student of the human condition in life has been invaluable.

Did you always want to be a voice artist and audiobook narrator? If not, what did you originally want to do?

Well, when I was a kid, I wanted to be a veterinarian. But then I learned the amount of school one needed to do for that, and quickly lost interest (though my love for animals never waned). But I would say yes, I always wanted to be a voice artist. Knowing that I could play so many different types of characters, and that the malleability of my voice would supersede any physical attributes (height, hair color, etc.) gave me such freedom as an artist. It’s the best job I can think of!

You were involved in Second City comic troupe. Do you feel that working with that improv comedy group helped with your character creation talents?

100%! The great thing about Second City, is not only are we improvising and creating great comedy, but there we were taught that you want to find the truth of the scene. Don’t just create something for the sake of creating it. Create a character bc it informs the scene and the overall world you’ve created, and (as life would not be anything without comedy) you will organically find the funny there. I like to create characters that are rooted in reality, bc they are then sustainable and relatable, and really we all have so many facets to ourselves, there is such a wealth to choose from.

I see you also did some work with Khan Academy Kids. What was it like working with online learning platforms like Khan Academy?

So rewarding! The greatest thing is getting to see all the kids that are learning and growing with this tool. Being even a small part of that is truly gratifying. It’s also just plain fun!

This sequel to THE PIONEER is available now on #audiobook with @HarperAudio!

Earth is uninhabitable. Tau is our home now.

We’re also talking with Bridget Tyler, author of Survivor, one of your most recent audiobook titles. What was it like working with Bridget and what do you think about the Pioneer series so far?

I love this series! I am always drawn to stories of strong females who have to overcome seemingly insurmountable odds to prove themselves, not just to others, but to themselves. I think there is a lot of truth in people not giving themselves enough credit and realizing their own worth. I love being a part of a story that shows just what perseverance looks like.

You’ve recorded hundreds of hours of audiobooks alone. Do you enjoy being in the booth? What are your most and least favorite parts of the job?

I do enjoy it. There is a comfortability in what I can create there. I do love getting to go into a studio, or even working from my studio over Skype, and getting feedback though. I would say the freedom I have to create in the booth is my favorite thing, and my lack of getting outside and absorbing vitamin D is my least favorite thing ;).

What are your favorite genres both to listen to and work on?

I feel very lucky that the majority of what I’ve gotten to work on is what I would want to listen to. Middle grade and YA are my favorites, especially stories that shine a light on a truth that one may not have realized how relatable it is.

You’ve done several YA titles and adult books. Do you have a preference?

My preference is always books with a story arc that needs to be told. Whether it is YA, Adult, Middle Grade, so long as I can take the listener on a journey and guide them through some sort of catharsis, and do so honestly.

What are some of your favorite YA books, either from your childhood or any contemporary titles you enjoy?

I grew up with The Engineer of Beasts (which is sadly out of print now) but that has always been a favorite of mine. Also My Side of the Mountain made this city girl want to live in the forest (but I soon realized that wouldn’t work out so well for me). The Hunger Games series was amazing when I first read them. The Mockingjay was especially beautiful.

This sequel to THE PIONEER is available now on #audiobook with @HarperAudio!

Earth is uninhabitable. Tau is our home now.

You’ve also been involved in some pretty big franchises like Sabrina the Teenage witch and RWBY where you’re part of an ensemble. How does ensemble production compare to titles you narrated alone? Do you have a preference or does it depend on the project itself?

With ensembles, we need to be in communication with each other as far as character voices and pronunciations. As, most of these are done alone at different times, we want to be sure to coordinate as much as we can, so that the listener will have a seamless experience. With Sabrina and RWBY (which is actually just me, no one else narrating that one :D), you also want to be as true to the voices of the characters of the original project, so that you are in line with what fans of those projects are used to. I’d say my preference definitely depends on the project.

What did you want to be when you were little and what do you think the kid version of you would think of what you have accomplished?

I wanted to be a vet, and a professional baseball player (first female 2nd baseman!). But I also wanted to play make-believe. I think the kid version of me would think what I’ve done is pretty cool!

Who are your greatest inspirations and role models?

Definitely my parents – my mom was a stand up comic up to my birth, so comedy ran pretty rampant in our house. And my Aunt Judy – she was such an inspiration and truly one of my biggest cheerleaders (and has informed a few characters :P). My Aunt Andy was the one who told me to pursue audiobook narration, and really pushed me toward it, so incredibly grateful for that. And of course Carol Burnett, Lucille Ball, Doris Day, Danny Kaye, Louis Armstrong and Joan Rivers. All of their musicality, their sense of play, and their ability to always find the funny in life inform me daily.

What advice do you have for up and coming voice artists?

Really hone in on what your instrument can do. You may not be able to do all of the things someone else can, but that doesn’t matter. There is only one you, and you need to know that implicitly, bc that’s what the world it interested in – YOU! And create with reckless abandon. And this is a business after all, so treat it as such!

Any big plans on the horizon or upcoming projects you’d like to talk about?

I’m about to start recording the next book in the RWBY series, so very excited for that, as well as the 3rd installment in Chilling Adventures of Sabrina should be out soon!

In honor of Women’s History Month we are asking all the creative people we have reached out to name some women who have changed their lives, someone you looked up to or someone you knew personally.

Carla Delaney was one of the first people to truly believe in me as a voice artist, and to mentor me. And Susan Boyajian has been my champion for years. And my mother Cathi Vilinsky is an inspiration every day.

Finally just let anyone reading know where they can find out about you and your work online and in social media.

You can find me on IMDB (Jesse Vilinsky) or on Instagram (@jsvilinsky) or on Twitter (@JesseVNYC) or check out my website http://JesseVilinskyVO.com for latest projects, news and more. 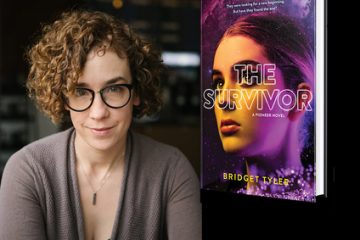 Interview With Bridget Tyler – Author of The Pioneer

We are pleased to present our premiere Island Audio interview, today the spotlight is on YA Sci-Fi/Fantasy author, Bridget Tyler. You’ve got a book that just dropped days ago and two previous books available for Read more…