Fans of the Netflix series Mindhunter are still reeling from the news that despite rave reviews and a strong cult following, the show is currently in limbo. For now it is uncertain whether the show will be back or not. The Netflix program was based on the bestselling book Mind Hunter: Inside the FBI’s Elite Serial Crime Unit by John Douglas. Douglas inspired several fictional characters like Frank Lundy from Dexter. Jason Gideon and David Rossi from Criminal Minds, as well as the entire unit they work in, are also partially based on Douglas’ life.

Douglas’ book outlined the pioneering methods of the Behavioral Science Unit as they used interviews with serial killers to develop a methodology today known as criminal profiling. Douglas inspired the character Jack Crawford in Thomas Harris’ book Red Dragon and its sequel Silence of the Lambs. Apparently however, neither actor Scott Glenn nor former FBI agent John Douglas were quite happy with the character, but for different reasons.

Douglas said he hated the character. “They don’t put across accurate portrayals, and [that] aggravates me,” Douglas told The New York Post. “I can’t look at those movies.” Meanwhile, Glenn refused to revisit the iconic Crawford character for a nearly opposite reason. While researching the role, Glenn met with Douglas. To help him along, Douglas played a graphic recording of serial killer’s Lawrence Bittaker and Roy Norris brutal rape and torture of a teenager. When asked why he played the tapes for him, Douglas simply replied, “Now you are part of my world.”

Mindhunter, however was a different story. “They’re going by the book and I am very pleased,” Douglas told the Post. Watching the series was, “like reliving my life all over again.” But what does any of this have to do with audiobooks? Well, that’s where serial killer Ed Kemper III comes in.

In the clip of Kemper in the video above, or the full 1984 interview the scene in Mindhunter is based on, Kemper is intimidating. At 6’9″ and with an IQ of 145, that’s no real wonder. In conversation, the Co-Ed Killer is  calm, intelligent… and utterly chilling. No less chilling is the thought that such a cruel and calculated socipath could have such a warm, resonant, pleasant even, speaking voice. Perhaps this is why he was so fitted for The Blind Project of the Volunteers of Vacaville. 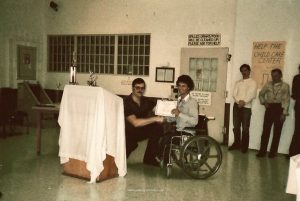 LA Times spoke with Kemper in January of 1987. After a blind couple visited to thank Ed before their marriage, the disarmingly charming murderer had this to say: “Their visit here is so special for us. We get letters of thanks from our blind patrons, but they never come inside the prison to meet us,” Kemper told the Times. Kemper was even honored for his work with the program by two large trophies.

He was actually in charge of the program at the time. As of that article, Kemper had read over 5,000 hours of books, four million feet of analog tape.

Can you imagine reading so much, as a blind person in the 1970s, that you are more familiar with the voices of serial killers than your distant family members?

Kemper narrated hundreds of books. God Emperor of Dune by Frank Herbert, Star Wars by George Lucas, Petals on the Wind and Flowers in the Attic by V.C. Andrews, The Rosary Murders by William Kienzle, Sphinx by Robin Cook, Bowdrie’s Law by Louis L’Amour, Dashiell Hammett’s The Glass Key and many more.

“I can’t begin to tell you what this has meant to me, to be able to do something constructive for someone else, to be appreciated by so many people, the good feeling it gives me after what I have done.”

Thanks for reading and keep checking back for more articles about everything
audiobooks. And don’t forget to check out our catalog . If anything looks interesting
we’d be glad to send over promo codes! You can email me:Robert Wrenlock or
drop a line to engage [@] island.audio for promo codes, more info about our
titles and services or to suggest a topic for a future article or request a guest
post trade. Find us on Twitter to stay updated on future releases, new articles
and other fun stuff.